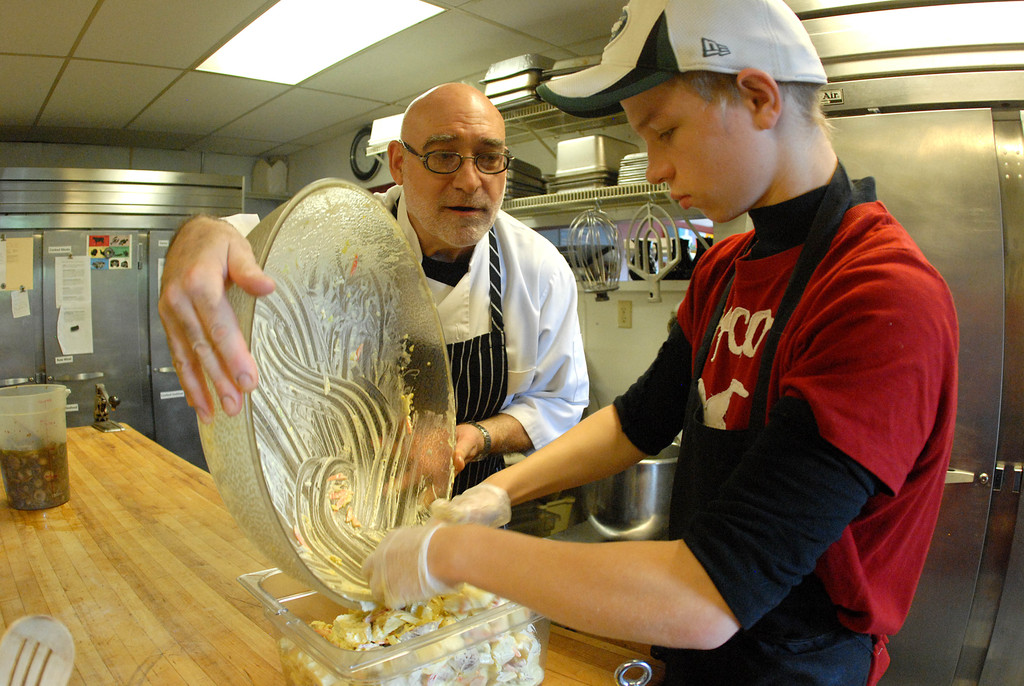 Posted at 08:39h in Press by Chef Bill Andrews
Share

It has been a restaurant for years, but Bill Andrews wants to make it a little bit more.

Mr. Andrews has plans for the storefront space on Waseca Avenue to become more than a place to grab breakfast or lunch or a ready-to-eat dish on the way home from work. He pictures Kitchenworx as an extension of what he started years ago at Leons in Providence.

It was at that restaurant where Mr. Andrews started sharing his skills with neighborhood kids, teaching them how to prepare foods and clean equipment. It has been decades since he first hired a neighborhood kid who had been expelled from school.

“He was 12 years old. He was tiny. In order for him to reach the sink he had to stand on a milk crate,” Mr. Andrews recalled. “But he was aces. He was a good kid.”

Mr. Andrews, sitting at a table inside Kitchenworx, offered the next chapter. He said that boy had made it, survived the inner-city streets. He had used the skills learned at Leon’s and was now managing one of the busiest, highest-grossing fast-food restaurants in all of Rhode Island.

Mr. Andrew’s is doing the same thing at Kitchenworx. He’s working with the school department, offering his restaurant as a training ground for a student who might benefit from the experience. There’s a middle school student named John who’s already started working there and who reportedly shows promise.

The training, the hands-on skills that Mr. Andrews offers to young people is nice complement to a restaurant that offers homemade breads and pastries, an assortment of breakfast and brunch dishes, a full lunch menu and a variety of take-out dinner options for residents who are pressed for time.

Mr. Andrews said he has been working in restaurants since he was 15 years old. He turned 61 this June. After owning Leons — he sold the restaurant in 2001 — he worked in development for a large fast food chain. He also ran owned and operated a restaurant in Exeter, and more recently worked as the director of food services for East Side Market in Providence. It was there, he said, that he honed his skills preparing Kosher-style foods and meals for Jewish holidays. He plans on bringing some of that to Kitchenworx.

Mr. Andrews credits his work at Capital Grille in Providence for his renewed attention on customer service. He said customer service was paramount at the well-known eatery.