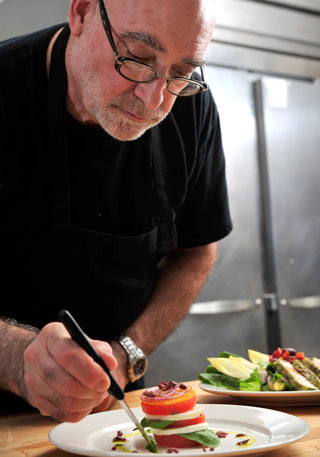 If you are from Rhode Island, or worked in or near Providence, then you probably remember one of Federal Hill’s most popular Mediterranean bistros of all time: Leon’s On The West Side. After 21 years as owner and head chef, Bill Andrews closed Leon’s in 2001 to pursue his personal catering and music career. Later, he opened Caspita Mediterranean cafe in Exeter, RI and served as Chef Consultant for several well known restaurants. Chef Bill is known for bringing together his creative twists, and fondness for old-school diner food to create his eclectic mixtures of American, Mediterranean, Italian, Asian, and Tex–Mex cuisine. “I cut my teeth working at my dad’s New York System Diner when I was a just teenager. I learned a lot about skills that I’d later use, like basic meat-cutting, short-order grill skills, and the importance of building relationships with customers,” says Chef Bill Andrews. “My dad was like a diplomat. He sat and talked to customers – and they kept coming back.” Bill also worked side by side with his mom, an old-school Italian who made, as Bill calls it, “The best darn soup I’d ever had.” From there, Chef Bill went on to earn his degree in Culinary Arts from Rhode Island School of Design. The rest, as they say, is history. Now, he has opened Leon’s Café & Catering, a friendly, local café, nestled in the quaint town of Barrington, in the heart of the East Bay. Besides his love of cooking, Bill loves music. He is a professional drummer & percussionist . His wife, Mary, is a professional singer. All three of his sons are musicians as well.